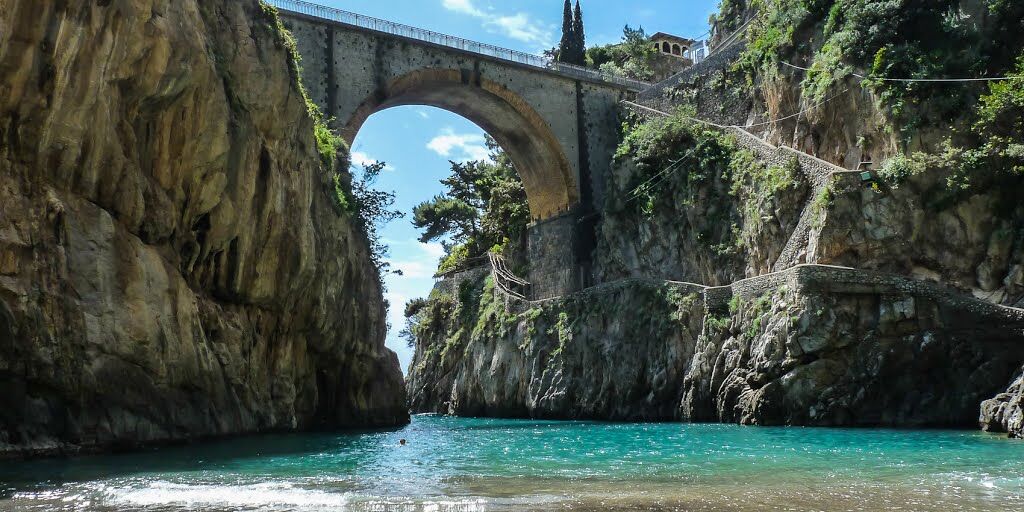 The Fjord is the dominant element that characterized the coastal landscape. It is a deep scar into the rock, almost a dolomitic landscape, in stark contrast with the sea and the long sandy beach.

In the past, a fishermen’s village nestled above this cove, and during the XVII century, an unexpected industrial development brought about change. The icy waters of the torrent Schiato, hurtling down from the Monti Lattari behind the cove, powered the machinery of a paper mill and a public flour mill.

Down the valley there is a “spandituro” or “drying room”, used for drying the paper produced. Today it houses an Ecomuseum, with an herbarium and a historical and geographical trail about legumes and cereals.

The two lateral ridges of the Vallone, which are about two hundred metres high, are criss-crossed by a network of pathways. Among them, the “Mad-Bat Path” is a botanical trail that is particularly useful to get to know the local Mediterranean scrub.
The fishermen’s village also houses the cinematic archive, “Museo Costa Diva – Le vie del cinema”, an itinerary through film sets which have had the exceptional location of the ‘Amalfi coast’ (including the film Amore, directed by Roberto Rossellini, with Anna Magnani, while the two were having a passionate affair here).
See also Positano