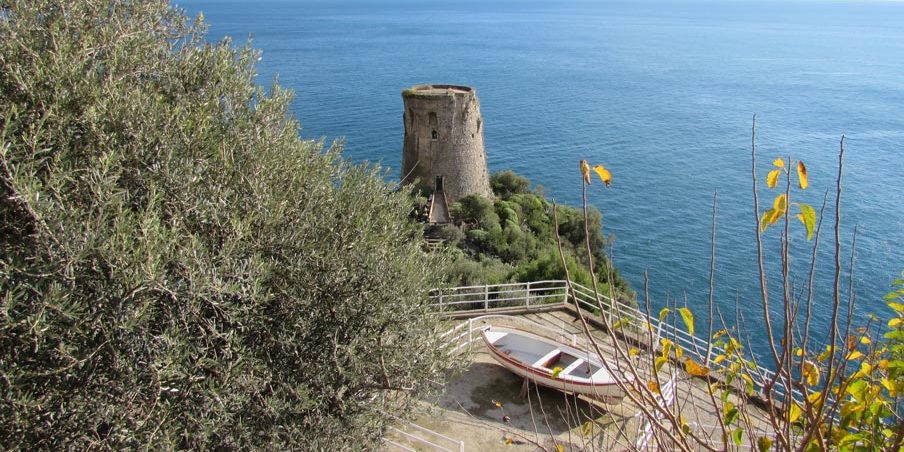 There are about thirty defensive towers built along the coastal strip that goes from Vietri sul Mare to Positano and that tell the story of eight hundred years (from the IX to the XVII century) of struggles supported by the local populations against the frequent and bloody Saracen raids and corsair . From the Byzantine period, in fact, passing through the dominion of the Swabians, Angevins, Aragonese and Spanish viceroys, the inhabitants of the Amalfi Coast had to defend themselves from pirate raids that, with unprecedented ferocity, plundered the villages leaving behind a red trail of blood, rubble and imprisonment. Some of these episodes have remained in history, such as the massacre of Conca dei Marini in 1543, the attack suffered by Cetara in 1534 or the Turkish invasion of 1587. There are two types of coastal watch towers: the first and oldest have a cylindrical shape and date back to the Angevin period.

They are tall, thin, with rare and small openings towards the top and mainly had an alarm function: from here, in fact, the imminent danger was signaled to the population, through the lighting of fires, so as to allow the inhabitants to find shelter in the woods, in the caves or in the fortifications. With the intensification of the raids, in the first half of the sixteenth century, the viceroy of Naples don Pedro of Toledo ordered the construction along the entire coastal strip of the Spanish Viceregno of Naples of a complex defensive system – the edicts spoke of a tower every 4000 / 5000 steps -, consisting of more massive and square-shaped towers (second type towers), with greater wall thickness on the outside. In fact, to mark the passage from the circular to the square shape was above all the advent of the artillery which necessarily led to a change in the construction of the fortifications, so as to make them more suitable to sustain the blows.

These fortifications, therefore, had the task of sighting, signaling, sheltering and active defense, through the use of weapons whose range allowed to hit a ship near the coast. The history of the coastal towers goes hand in hand with the political-military evolution of the Kingdom of Naples: already 30 years after their construction, many of them needed urgent maintenance work or even fell into disrepair. With the Bourbon restoration of 1815, most of the towers were disarmed and used for other purposes (housing, traffic light or telegraph signals).