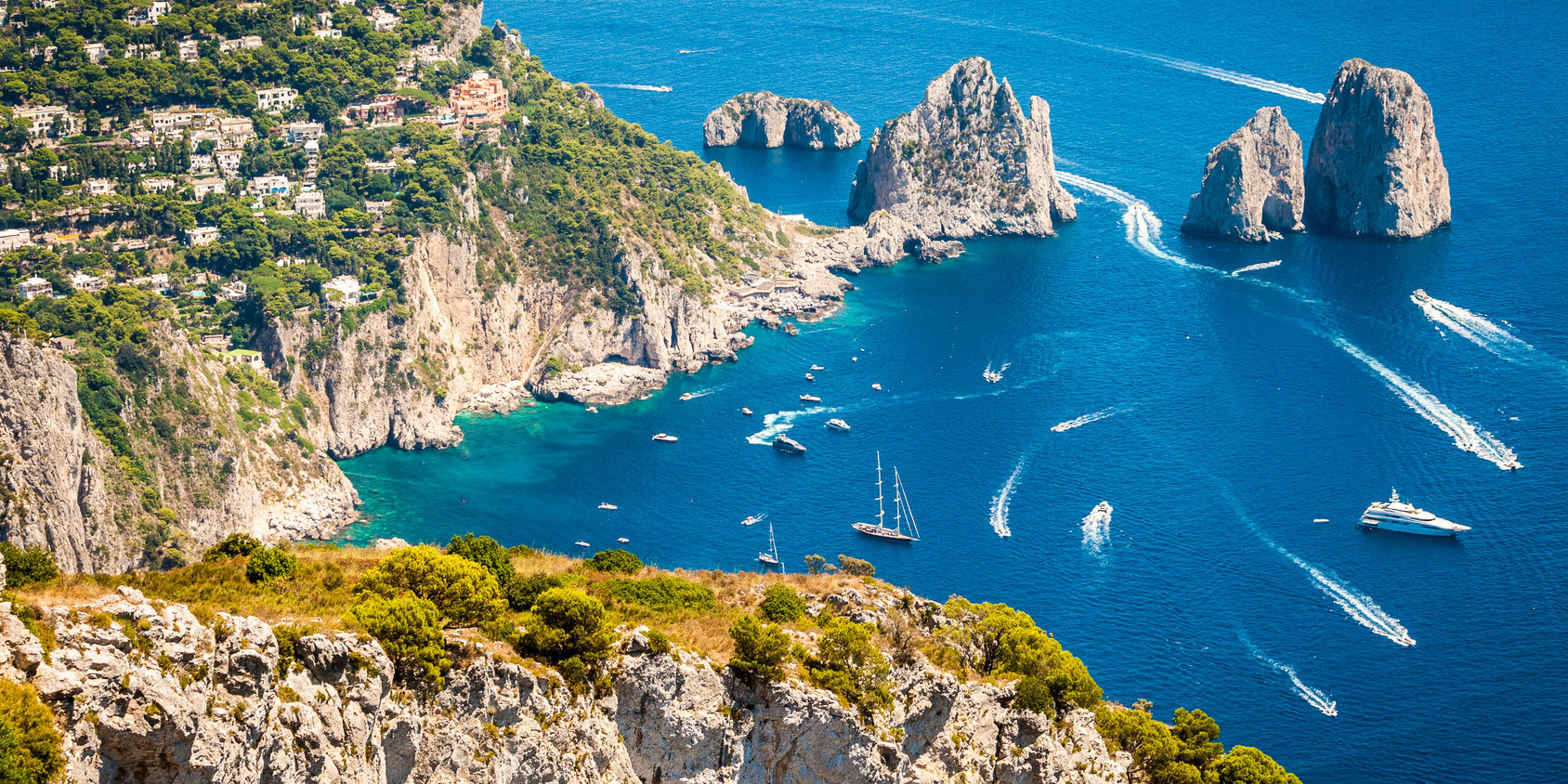 Capri is one of the most charming and exclusive island of the world.
The history of the island is ancient it was first settled by Phoenicians.
The Island is divided in two important towns, Capri and Anacapri.
The first one is glamorous and for renowned its five star hotels, and its famous “Piazzetta”.
In contrast Anacapri has romantic walks and enchanting sea-views.
A boat trip around the island is a must for travellers coming on the Amalfi coast.
Positano Boats organizes a tailor-made boat excursion or a daily collective excursions.

What to do and see in Capri
Capri is a very interesting Island and offer a lot of historical and beautiful sites to see. Positano boats suggest you to visit the following place to really admire the beauty of this famous island.

Monte Solaro
It is the highest place on the island (589 metres above sea level). You can either walk there or take the chairlift. The chairlift station is quite near Piazza Vittoria and allows you to reach the top quite quickly while you enjoy a splendid view of Anacapri, the Gulf of Naples, the Sorrento Peninsula and the Gulf of Salerno.

Villa San Michele
Villa San Michele in Anacapri was the home of the Swedish physician, Axel Munthe. Built on the ruins of an ancient Chapel dedicated to San Michele, the villa now belongs to the Axel Munthe Foundation and has been transformed into a Museum.
The building is articulated on various levels: the study is on the first floor, the loggia crosses pergolas and columns to reach a circular viewpoint which looks out across the Gulf of Naples.
Fragments of sarcophaguses, busts, Roman paving, marble and columns can be seen. In the garden there is a Greek tomb and a granite Sphinx which gazes out over the whole Island of Capri.

Villa Jovis
is situated at the end of Viale Amedeo Maturi, where one finds a number of steps faced with marble slabs originating from the Roman Villa. Villa Jovis, built in the first century B.C. and attributed to Tiberius, was chosen for its position on the cliff’s edge which guaranteed both privacy and security, of vital importance to the Emperor.

Blu Grotto
A magic no word or image could ever describe. It is a 60-metre-long, 25-metre-wide cavity.
There is actually a bigger but completely submerged opening; this veryunderwater entrance allows the blue coloration of the water inside the grotto, due to a phenomenon of sunlight reflection. There is an almost surreal view in the inside, the transparency and the blue colour of the water give us the impression of navigating through a clear sky, and the boats seem to float on a fantastic universe.

Piazzetta
Piazza Umberto I, better known as the “Piazzetta” is one of the most fashionable square in the world. In the past, the Piazzetta was home to a lively fish and fruit market, in the 1938 an young islander opened a bar and arrange table and chairs outside, soon this bar became the hart of Capri social life, the square earned itself the label of “salotto del mondo” (the world’s sitting room). Today the Piazzetta with its historical bar, elegant jewelry shops is also the home of Capri Town Hall located in the former bishop’s residence