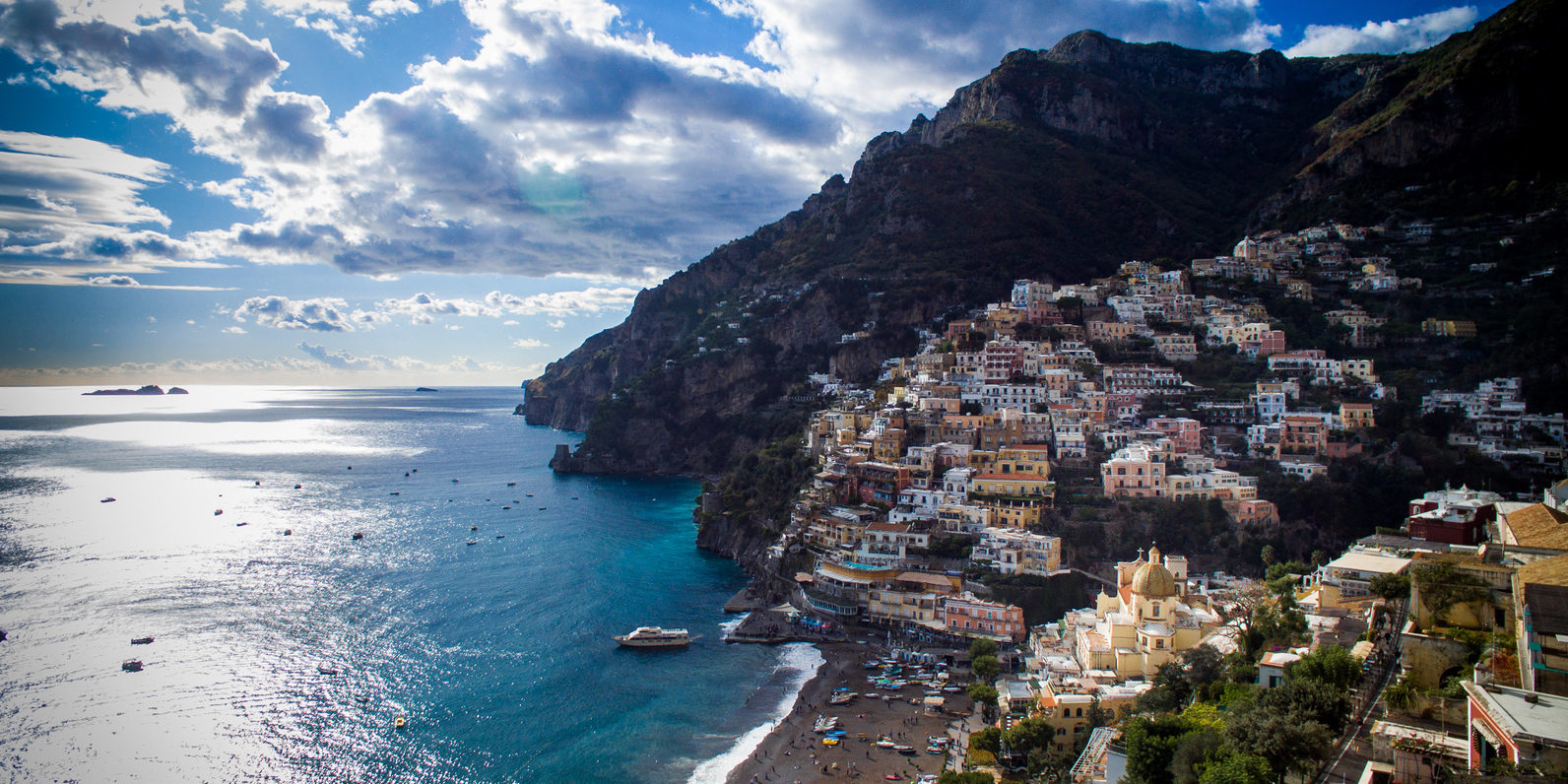 Positano was a port of the Amalfi Republic in medieval times, and prospered during the sixteenth and seventeenth centuries. By the mid-nineteenth century, however, the town had fallen on hard times. More than half the population emigrated, mostly to America.
Positano was a relatively poor fishing village during the first half of the twentieth century. It began to attract large numbers of tourists in the 1950s, especially after John Steinbeck published his essay about Positano in Harper’s Bazaar in May 1953: “Positano bites deep”, Steinbeck wrote. “It is a dream place that isn’t quite real when you are there and becomes beckoningly real after you have gone.”

The beach of Positano.
The church of Santa Maria Assunta features a dome made of majolica tiles as well as a thirteenth-century Byzantine icon of a black Madonna. According to local legend, the icon had been stolen from Byzantium and was being transported by pirates across the Mediterranean. A terrible storm had blown up in the waters opposite Positano and the frightened sailors heard a voice on board saying “Posa, posa!” (“Put down! Put down!”). The precious icon was unloaded and carried to the fishing village and the storm abated.

Culture
Positano has been featured in several films, including Only You (1994), and Under the Tuscan Sun (2003), as well as more recently in Kath & Kimderella (2012) and being mentioned in the 2009 musical film Nine in the song “Cinema Italiano”. It also hosts the annual Cartoons on the Bay Festival, at which Pulcinella Awards for excellence in animation are presented.

From July 1967 and through most of the 1970s, Positano was home to singer-songwriter Shawn Phillips and where most of his best-known work was composed. Mick Jagger and Keith Richards from The Rolling Stones wrote the song “Midnight Rambler” in the cafes of Positano while on vacation.

Renowned director and producer Franco Zeffirelli owned the Villa Treville in Positano, where he took residence over a 35-year period and hosted a coterie of literati and stars of the stage and screen. He hired his friend, Renzo Mongiardino, who collaborated on many of his theater and opera projects, to design the exquisite interiors which reflect the local design sensibilities and craftsmanship.
The Villa Treville has since been converted into a five-star boutique hotel.

German pianist Wilhelm Kempff made Positano his summer retreat and there he taught a summer course on the Beethoven piano sonatas and concerti. Since his death in 1991, the Beethoven Kurse has continued under the organization of the Wilhelm Kempff Kultursting, having had as teachers Gerhard Oppitz and John O’Conor. Today tourism is by far the major industry. Positano is also very popular for Limoncello and “L’Albertissimo”, an alcoholic tipple that can only be found at a small stall at the main harbour.